Sculpture on the Peninsula - epic art on Canterbury's cultural landscape

Sculpture on the Peninsula - epic art on Canterbury's cultural landscape

It's a grand art display in a stunning location but Sculpture On the Peninsula is also a touching story of a legacy of enduring friendship writes VICKI ANDERSON.

Sculpture on the Peninsula has become a highlight on Canterbury's cultural landscape for its impressive open air art display but those behind these grand scenes have been painting a sweet picture of the long-lasting bonds of friendship for almost 20 years.

It is an opportunity to view contemporary sculpture created with the open air in mind by a variety of established and emerging New Zealand artists.

This year's event features 71 sculptures by artists including Hannah Kidd, Paul Dibble, Tayanna Meharry, Mark Whyte and more, who have utilised a wide range of innovative and traditional media and styles. These works are installed in sheds, paddocks and even the Loudon Farm's slaughterhouse.

The event begins with a ticket-only opening event on Friday, November 8, from 5pm to 8.30pm. It will include performance, sculpture, refreshments and a picture frame auction featuring creations from 13 artists, with writer Joe Bennett as auctioneer.

"People just love it," says artist and long-time event co-ordinator Gill Hay. "We have around 1000 people coming to the opening night and over the weekend we'll get around 5000 people through. I think its appeal is a combination of the beautiful location, the impressive art and the family atmosphere. It's quite a relaxed way to see art. We also have live music and locally-sourced food so it's just a great day out." 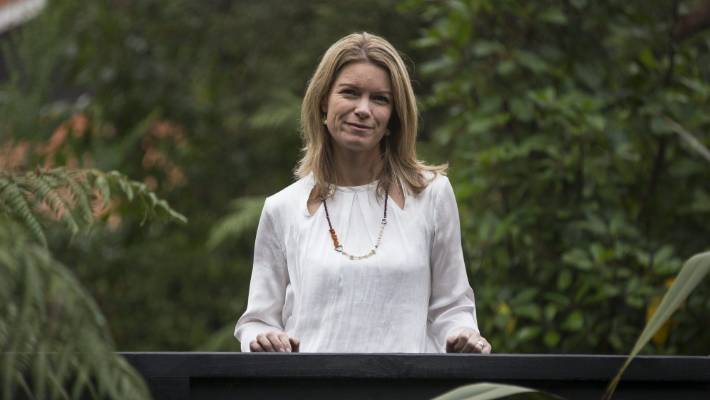 ALDEN WILLIAMS/STUFF
Chelsea Halliwell is now on the committee with her late father's friends.

You could pack a picnic but the food on site will include wild mushroom burgers, gourmet salad bar concoctions, home-baked smoked salmon and asparagus or Turkish lamb pizzas followed by hand-rolled ice creams and Lombardy traditional chocolate cake with berries and cream.

All artworks are for sale with proceeds to Cholmondeley Children's Centre – pronounced "Chum-lee", it provides short-term emergency and planned respite care and education to children aged 3 to 12.

Since it began in February 2000 under the title Sculpture in the Gardens, the event has raised more than $650,000 for the charity.  It is quite a feat considering its humble beginnings.

For Hay and the 10-strong "committee" of friends behind the event, Sculpture On the Peninsula is a "gathering of the clan" and an opportunity to continue the legacy of a dear friend.

Sculpture on the Peninsula was the vision of the late Geoff Swinard.

Passionate about sculpture, Swinard, a talented craftsmen who loved working with wood, enlisted a group of friends to form a committee to run the event.

"The committee is not art experts as such, but people from all walks of life who are interested in the arts," says Hay. "This was Geoff's concept, he had a passion about sculpture in the outdoors."

Now known as the Lombardy Trust, the committee has continued the event for two decades in his memory.

The trust aims to offer the public an event that represents current art practice in New Zealand.

Swinard's daughter, Chelsea Halliwell, is now on the committee.

"Dad loved sculpture," she says. "He put the first event together in 2000 and it was called Sculpture in the Gardens. Sadly dad developed a brain tumour and died that year. After he died the committee re-formed and continue to hold the exhibition as a tribute to him." 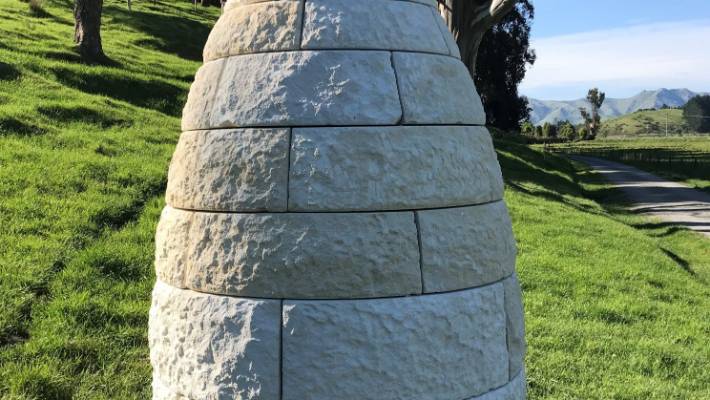 SUPPLIED
A work by The Quad Squad - a group of stonemasons who are working on the Arts Centre.

Hay says the Harbour Basin community and an army of volunteers rally around the event too.

"We have schoolgirls scooping ice creams and other volunteers who spend hours here helping to get it all ready," she says.

Hay particularly enjoys working with artists and says the biggest difficulty she faces is typically logistical issues around actually getting enormous sculptures into the right locations.

"This week has been all about that," she says. "But we are getting there. Dealing with the artists is the best part of it for me, I really enjoy that."

The eclectic list of artists showing their works is impressive and ranges from Alison Erikson's hauntingly elegant Portent, to an intriguing stone beehive creation by a group of stonemasons, known as The Quad Squad, who are working on restoring the Arts Centre.

North Canterbury artist Sam Mahon has two works at Loudon, a piece titled Everybody knows and a portrait of his daughter's horse called Southerly. He describes one as an "antidote" to the other.

"Mostly the work we generate here has some kind of environmental or political theme, but too much politicking makes it hard to pay the bills, of course," he says. "The horse was straightforward; it's simply a portrait, but more than anything, carving it was a joy. I love horses. When I'm riding I'm connected to thousands of years of history, to substance. On the other hand, when I hold a cellphone I feel nothing."

Mahon goes on to tell the story of a friend, a local farmer, who leased out his land two years ago and "went off to explore the Wakhan Corridor".

"He was riding alone one day when an Afghan came towards him from the other direction carrying a goat on the saddle and a kalashnikov over his shoulder. They stopped abreast and for 10 minutes discussed the beauty and failings of each others' horses. Neither spoke the others' language but there was language in common nevertheless."

Carving the horse was a "whole lot different from carving Nick Smith's genitals in the depths of winter two years ago".

"There have been many paintings over the years that I would rather not have painted except that the politics of the time demanded a response."

Mahon's other piece, Everybody knows, is inspired by the Leonard Cohen song of the same name.

"Even under the coalition we're still waiting for change. This is as good a time as any in New Zealand history for art to do its proper job and shout truth to power, or hold it at the tip of a sword as would Cyrano. But for the most part it doesn't, for the most part art, these days, is simply decoration."

Holding truth to power comes at a cost for an artist. If the artist is going to cross the Medici then the artist, like Cyrano, should expect to "end up living on second-hand lettuce leaves in a leaking garret".

"When I make a piece like Everybody knows for Loudon, I must also make the horse," Mahon says. "The horse sculpture is my redemption: 'Dear me,' says the 1 per cent, 'although Sam can be, at times, thoroughly distasteful, for the horse we will forgive him'."

Hay says beautifully created axeheads will be on display in the farm's slaughterhouse and an interactive cafe exhibit will be sure to entice many. 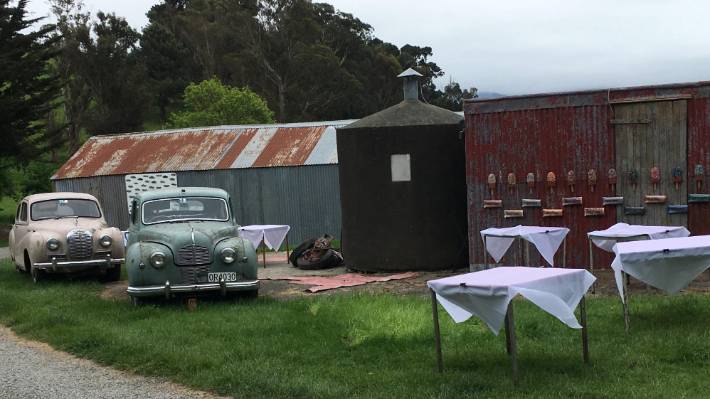 SUPPLIED
Amanda Newall's interactive cafe installation for Sculpture on the Peninsula. Through the rusty Austins and four performers, including herself, she hopes to inspire conversations about Brexit.

The latter is courtesy of Amanda Newall, who returns from London to present her interactive work which is a cafe with a twist. A previous work saw her enlist The Mockers to dress as silverfish to recreate a gig in 1980s Timaru for her movie The Hoover Diaries. It was about the commercial fishing industry and involved a murder in Timaru she gave evidence about in court as a 13-year-old.

"I've interviewed people who are from New Zealand living in Britain and British people living in New Zealand in relation to hopes and expectations and the mother country, Brexit," says Newall. "I will have four people performing on the site – for the cafe. The Stewards will be in the cars and waiting for the public to engage ... they will be enacting different perspectives on Brexit, the UK and New Zealand,"

Newall is interested in the idea that the Austins are rusty but nostalgic as a symbol of Brexit.

"I'm interested in the conversations and anecdotes about the mother country. Similarly to The Hoover Diaries I'm interested in the power struggles relating to capitalism and citizenship, trade exchange and global flows and how this affects people's lives. I want to use the work to understand the relationship between Britain and the colonies."

One of the cars featured, an Austin A70 Hampshire, is the car she drove to high school.

The "rusted" garments she has created are important to the work, she says, because they allow the performers – herself, Mike Newall, Jess Hammond and Monica Jordyn Beaumont – "agency to engage with the cafe guests".

"Rather than restoring the cars I've been rusting the garments," says Newall. "It's a playful way of addressing the fact that Brexit is pretty much a club of stupidity."

Hay is looking forward to seeing the creations come to life this weekend and also hopes to pick up a "small piece" of art to add to her private collection.

"That's something else I really do enjoy," she says. "It is art for all, whether you want to spend $100 or $100,000. I have picked up little bits and pieces over the years that have meaning for me." 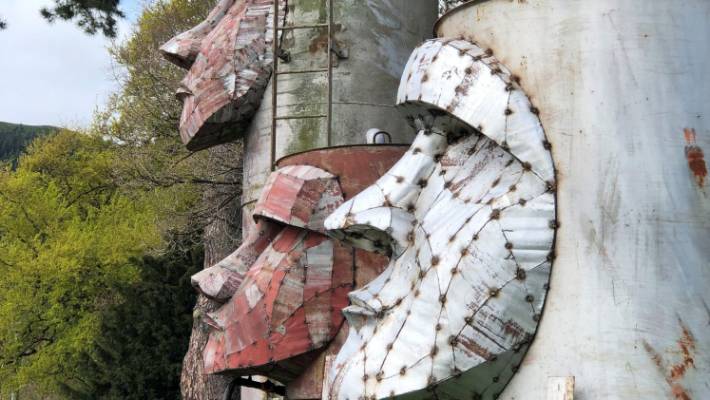 SUPPLIED
The Watchmen artworks by Hannah Kidd were created for Sculpture on the Peninsula 2019.

But most of all, this weekend is a chance for "the committee" of long-time friends to make more memories and to continue the legacy of their dear friend who started it all.

Halliwell says she is certain her dad would be pleased by how much Sculpture On the Peninsula has achieved for Cholmondeley, a charity he was keen to support.

"He really admired the work of Cholmondeley. I think he'd be thrilled to see how far his little garden event has come and the way it still brings the community and artists together now nearly 20 years later." 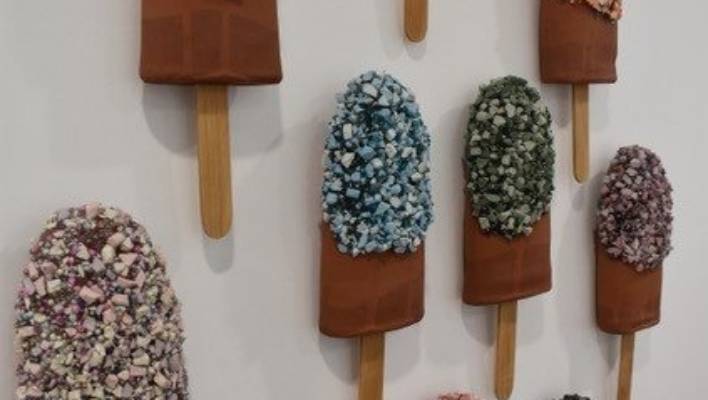